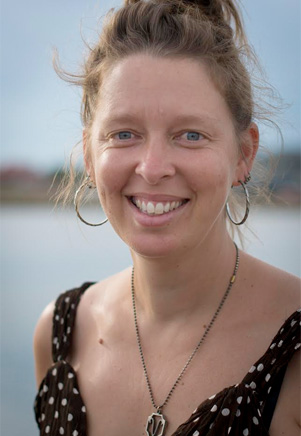 Heather Taylor Johnson is a novelist and poet, born in Minnesota. She remembers snow, and she writes about it. She spent the first twenty-five years of her life moving around the United States, discovering arid landscapes of red rock, humid backyards with grass and trees growing out of soft red clay, enormous and climbable mountains and the fresh water that springs from them, and she writes about it all.

In Adelaide, in 1999, she decided to stop moving, to set down roots for herself and her future family, where there are eucalyptus trees and art, which she writes about.

She worked hard for her PhD and from it came a novel about displacement and belonging, a common theme in her work. She wrote a book of poetry during her candidature about birth and death (other common themes) because during her time at the University of Adelaide she had experienced birth and she had experienced death. During that time she’d also married a man, and she writes about him, and they have three children, and she writes about them. She also writes about their dog Tom.

She’s ridden her bike all over Australia and she loves Australia – its spare country, its emotional cities, its easy gait – and she writes about it, about all of it, Australian earth, Australian pavement, the Australian Southern sky, and bicycles. She’s travelled all over the world and loves to write about that. She writes about illness, a lot, because she has Meniere’s disease and it’s interesting, to say the least. She writes about the air when she’s falling through it; she used to be a skydiver.

She’s published poems, lyric essays and literary reviews in journals like Meanjin and Southerly, Cordite and Westerly, Griffith Review and TEXT. Working as an editor makes her giddy, so she’s done that a few times, probably wouldn’t mind doing it again someday.

If she had to eat one type of food every day for the rest of her life she would choose soup. If she had to be cliché, she’d be a happy ending.